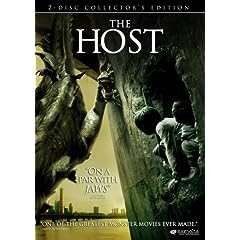 The Host (괴물, Gwoemul), the biggest Korean film of the year. The Host became the first Korean film to sell 13 million tickets, surpassing the all-time record held by King and The Clown. Gang Du’s family is the epitome of dysfunctional. His son Nam Il went from promising college graduate to cursing, molotov-throwing problem child; his daughter Nam Joo could have become an archery star, but is now just the one who calms everyone down when things get heated. Gang Du spends his days running a snack stall near the Han River, and his only hope, indeed the family’s hope, is on the shoulders of his youngest daughter, Hyun Seo (Ko Ah Sung). Unbeknownst to everyone, however, a horrible monster has been growing in the polluted waters of Han River, and it snatches Hyun Seo from their life. Unable to get any help from the authorities, the family is determined to get Hyun Seo back on their own, no matter what it takes.